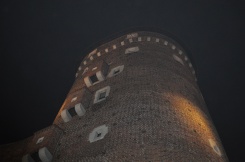 Nearly every day I walk at the beach near my house. From the top of the cliff I make my way down a staircase that boasts 151 steps. Naturally, when I finish my walk, I often take the same set of stairs back to the top. Some people, including my husband and his friend, run up and down them numerous times as part of their workout regime. I’m lucky to get back up them once.  I make it up the first three flights pretty easily, but when I hit that fourth one and see three more to go, I have to change my perspective. The only way I can manage is to not look at the top from where I am. From that point on, I only look at the next step, and then the next, and so on. Breathe deeply and finally I’ve reached the top.

Allow me another anecdote.

Today I attended a wedding at which we savored delectable food. As is usually the case, the bride and groom cut their wedding cake and plates were passed for the guests. I thanked the attendant who offered me cake, and after I took one bite, I turned over the remainder to my husband. The chocolate melted on my tongue with delicious temptation, but I simply didn’t feel compelled to finish it. One taste was enough. That’s because three weeks ago I decided to go without eating any added sugar for three weeks, and as a result I didn’t crave it any longer. I had been indulging a bit much in sweets for the past…uh…too many months (like since Christmas goodies), and the benefit of those extra sugar calories was only the rise of numbers on my scale. I could have said “I’m never eating sugar again” (highly unlikely!) or “Boy, I really need to lose weight” (ya think?), but thinking that way would not have been helpful.

I knew I had to set a concrete and drastic goal.

You may be wondering what these two seemingly unrelated stories have to do with writing…or maybe you’ve already experienced the ah-ha that I did recently. These stories describe two of the most important things I’m learning about writing:

For me, one step at a time is editing my book without worrying yet about where I will send it when I’m done; or developing a character for a book without having the whole story of his/her life mapped out within the novel yet.

A concrete goal has been writing 1,000 words per day; editing 20 pages in a day; or writing for two hours per day for the next fourteen days.

Combine the two revelations and each small, concrete goal is the next single step to focus on!

Suddenly, I find that I’ve written 4,ooo words in a week and my character’s life is unfolding on my computer screen! Editing a little each day has produced a book that is more than halfway finished. I think you get the picture. Small goals are the single stepping stones to our destination.

See you at the top!

What are some of the steps you’re taking? What goals have you set? What part of the big picture have you seen completed so far?

3 thoughts on “Getting to the Destination”